Philip Pearlstein: Seventy-Five Years of Painting is a survey exhibition featuring paintings by master realist Philip Pearlstein (b. 1924, Pittsburgh, PA). This exhibition includes the artist’s earliest works c. 1940’s through the development of the modern figure paintings for which he is internationally acclaimed.

Philip Pearlstein’s career as a lifelong artist began with early honors. As a high school student in Pittsburgh, Pennsylvania, he won first prize for his painting Merry-Go-Round in Scholastic Magazine’s 14th National High School Art Exhibition. Two of his award winning paintings were later reproduced in the July 1941 issue of Life magazine. Emboldened by this early experience and the support of his parents, Pearlstein enrolled in the Carnegie Institute of Technology in 1942. His first year of college was cut short as he was drafted into the Army the following year.

After Infantry training at Camp McClellan, Alabama, Pearlstein was transferred to Camp Blanding in Florida. There he began to document his day-to-day experiences with pencil sketches, pen and ink drawings, and watercolors. Thanks to his artistic abilities, G.I. Pearlstein was assigned the position of sign painter while on deployment in Italy in 1945. In his WWII memoir, the artist credited these unique skills as having saved his life. As a sign painter he developed the layout, drafting, lettering and printing skills he would use as a graphic designer later in his career.

Upon his honorable discharge from the army in 1946, he was sponsored by the G.I. Bill to return to the Carnegie Institute of Technology. There he studied under noted professors Robert Lepper, Balcomb Greene and Samuel Rosenberg. While pursuing his Bachelor of Fine Arts degree, he befriended fellow student and Pittsburgh native Andy Warhol. After graduating in 1947, Pearlstein and Warhol moved to New York City together to begin their artistic careers. During their time as roommates Pearlstein painted Portrait of Andy Warhola, 1948, which Warhol later gifted to the collection of the Whitney Museum of American Art.

In 1950 he wed fellow artist Dorothy Cantor and began his graduate studies at New York University’s Institute of Fine Art. At the time of his graduation, noted art critic and essayist Clement Greenberg selected Pearlstein’s work for Emerging Talent, an influential group exhibition at the Kootz Gallery in New York City. Thanks to his growing reputation as a young talent, Pearlstein was awarded a Fulbright grant in 1958. He used the grant to return to Italy and immerse himself in the landscape and culture he recalled from his time in the army.

Through the late 1950s Pearlstein’s paintings depicted the landscape and architectural ruins he found while abroad. These early landscapes are characterized by a freer Expressionist style than his later work. The Italian ruins were symbolic to him as an artist and a veteran, representing the aftermath of the violent war years. After returning from Europe, he began to experiment with drawing the human form during figure modeling sessions. By the early 1960s he had found his calling as a painter. Utilizing the classical subject of the nude figure, he began the extended series of paintings with which he is most identified.

Working only from life, never photographs, Pearlstein has become renowned for realistic depictions of models in complex interiors. These scenes often feature colorful props and oblique perspectives of the figure. The ability to look objectively at the human body as an object in the scene, one element of an overall composition, has characterized Pearlstein’s paintings for decades. The props and collectibles featured alongside the figures range from toys to antiques, Americana novelties to international art objects. Much like the models, each object is an equally important element of the final composition. With all narrative content removed, the consistency of finish and the technical ability of the artist’s hand becomes the true subject.

Among Pearlstein’s honors are a National Endowment for the Arts grant, a Guggenheim Foundation fellowship, and election to the American Academy and Institute of Arts and Letters. He has been a dedicated teacher throughout his career, notably at Pratt Institute and the Brooklyn College of the City University of New York. In 2008 he received a Lifetime Achievement Award, National Academy, New York, and the Scholastic Distinguished Alumni Achievement Award. His works are found in the collections of over seventy museums in the United States, including the Art Institute of Chicago, the Corcoran Gallery of Art, the Metropolitan Museum of Art, the Museum of Modern Art and the Whitney Museum of American Art. Pearlstein, age 93, currently lives and works in New York City. He is represented by the Betty Cuningham Gallery. 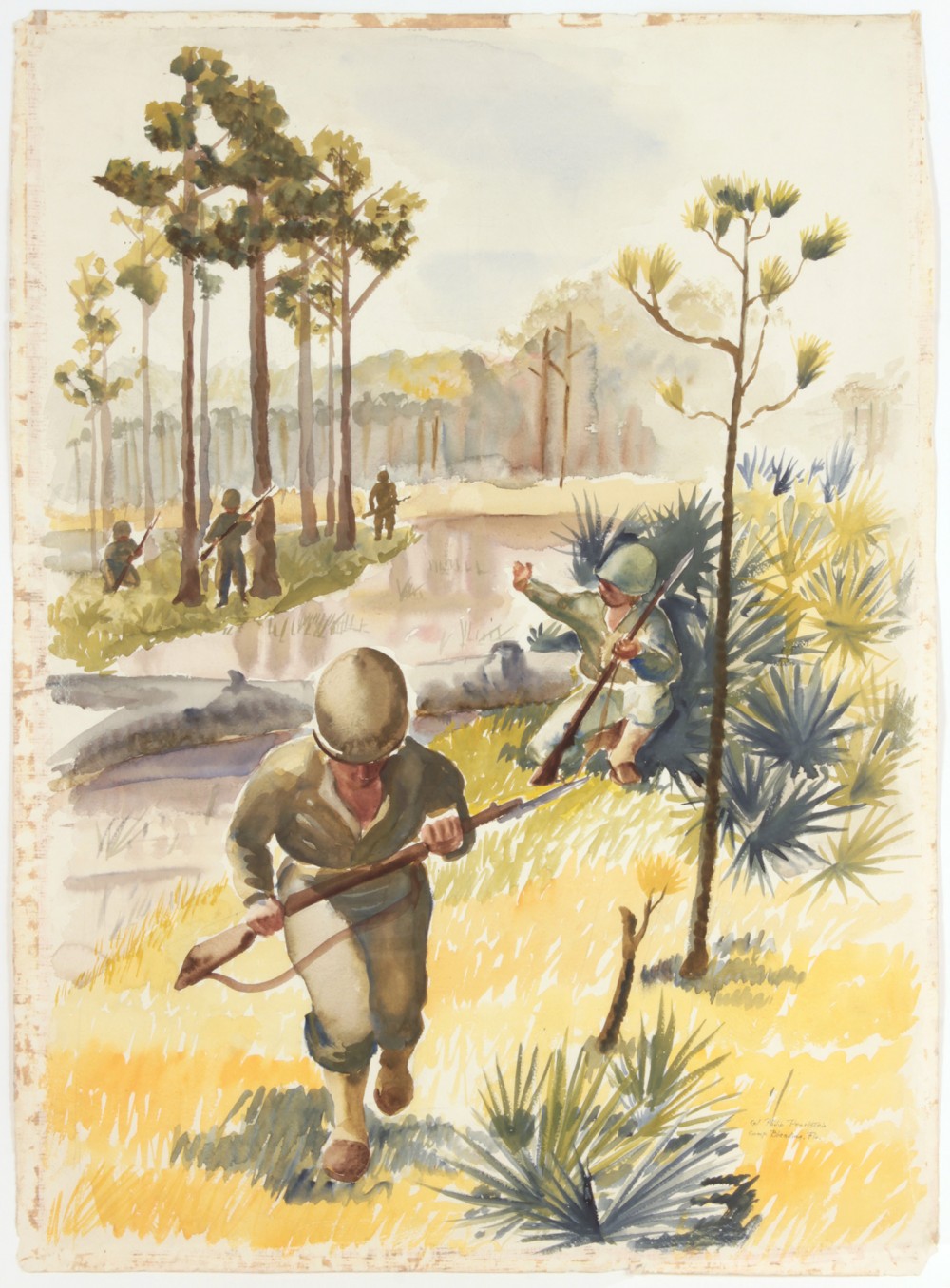 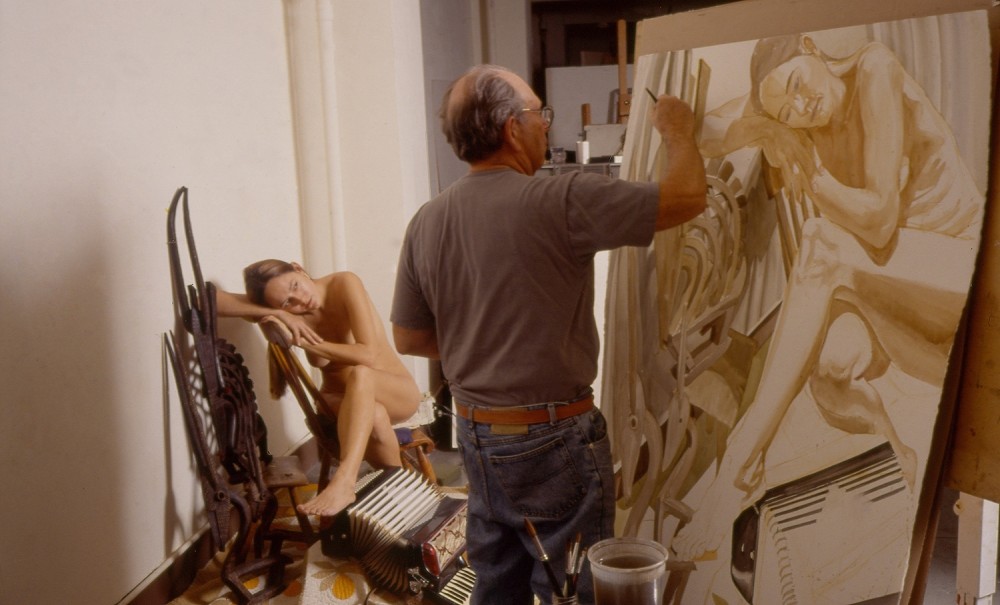 Philip in his studio painting, by Jerry Thompson, 1993-2 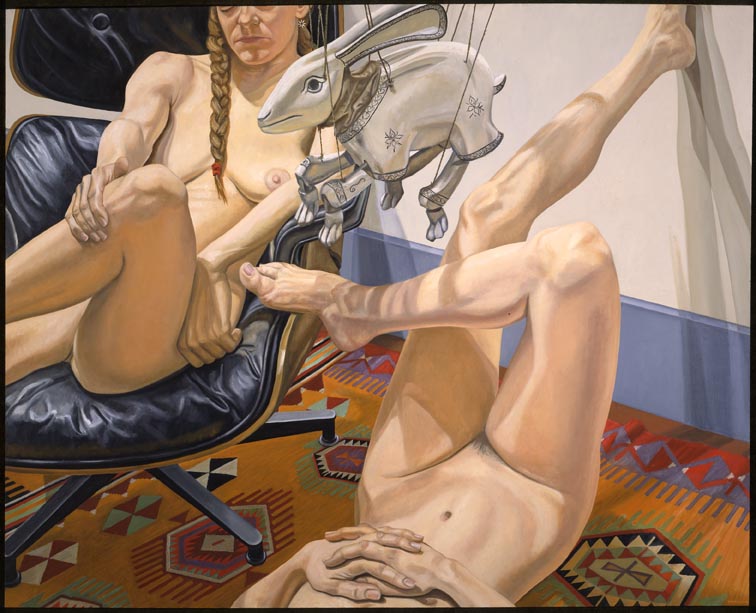