Ansel Adams (1902-1984), photographer, musician, naturalist, explorer, critic and teacher, was a giant in the field of landscape photography. His work can be viewed as the end of an arc of American art concerned with capturing the “sublime” in the unspoilt Western landscape. This tradition includes the 19th century painters Albert Bierstadt, Thomas Cole and Thomas Moran, and the 19th century photographers Carleton Watkins, Timothy O’Sullivan and William Henry Jackson.

For much of his early adulthood, Adams was torn between a career as a concert pianist versus one in photography; later, he famously likened the photographic negative to a musical score, and the print to the performance. Yet most museum-goers are only familiar with the heroic, high-contract prints on high-gloss paper stock that Adams manufactured to order in the 1970s-80s, coinciding with the emergence of the first retail galleries devoted to photography. As performances, these later prints are akin to “brass bands.” Much less familiar are the intimate prints, rich in the middle tones – the “chamber music” – that Adams crafted earlier in his career.

This exhibition focuses on the masterful small-scale prints made by Adams from the 1920s into the 1950s. Already in this time period there is quite an evolution of printing style, from the soft-focus, warm-toned, painterly “Parmelian prints” of the 1920s; through the f/64 school of sharp-focused photography that he co-founded with Edward Weston and Imogen Cunningham in the 1930s; and, after the War, towards a cooler, higher-contrast printmaking style. Throughout, Adams is revealed as a poet of light, both in the field and in the darkroom.

All photographs are from the private collection of Michael Mattis and Judith Hochberg.

Sponsored By: Commonwealth Charter Academy and Harrisburg University of Science and Technology 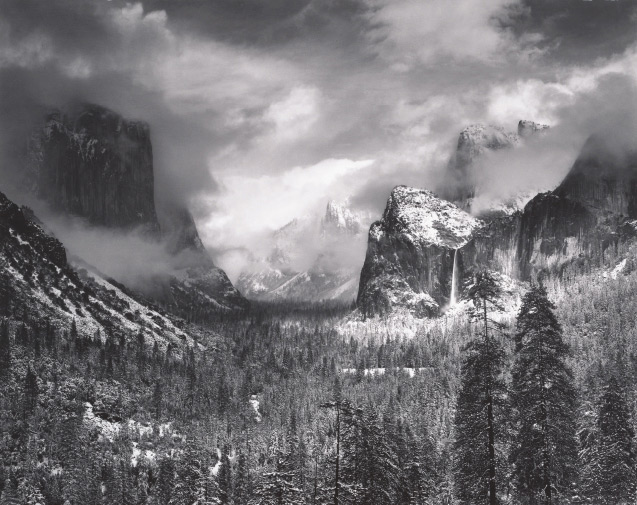